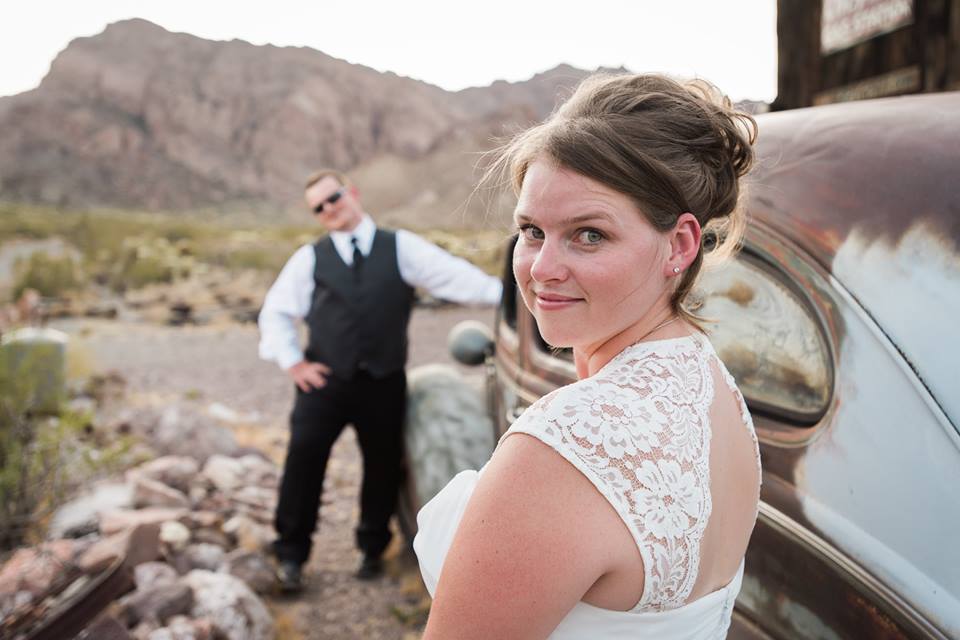 Here at Luv Bug Weddings, we have seen many couples who have met their perfect match online, either through a dating service or community group that was a shared interest. Phil and Nicole were brought together through both. Finding one another on match.com as well as both of them having an affinity for Jeeps was the ‘meet cute’ that opened the door for their love.

Their elopement at Nelson Ghost Town was the perfect way for them to celebrate the beginning of their lives together as Husband and Wife, and create some life-long memories along with some amazing wedding photos to share with future generations. Nelson is just outside of Las Vegas and is the perfect place to capture a romantic, rustic setting in the Mojave Desert for a ceremony and photo tour. 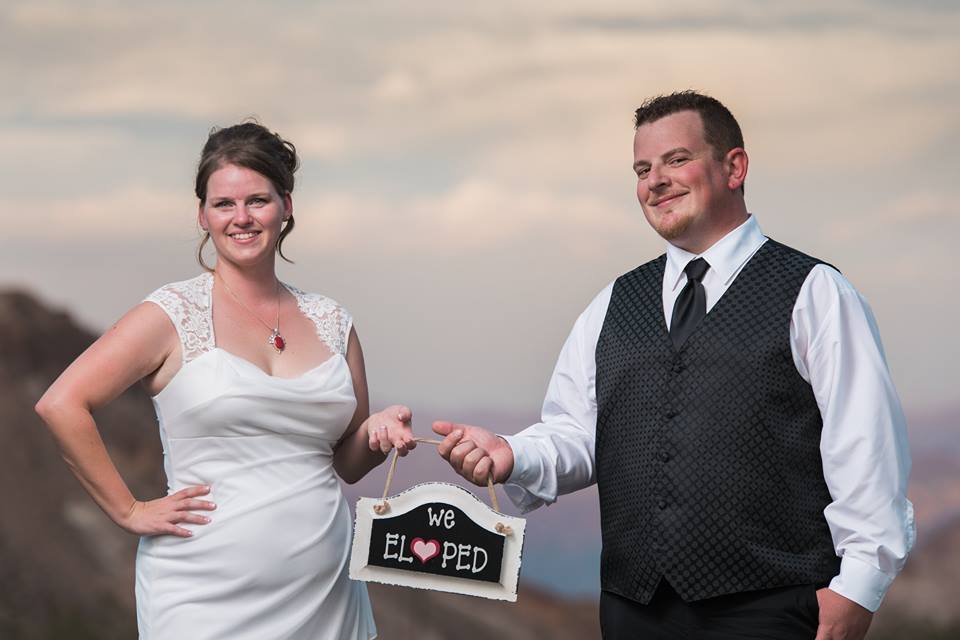 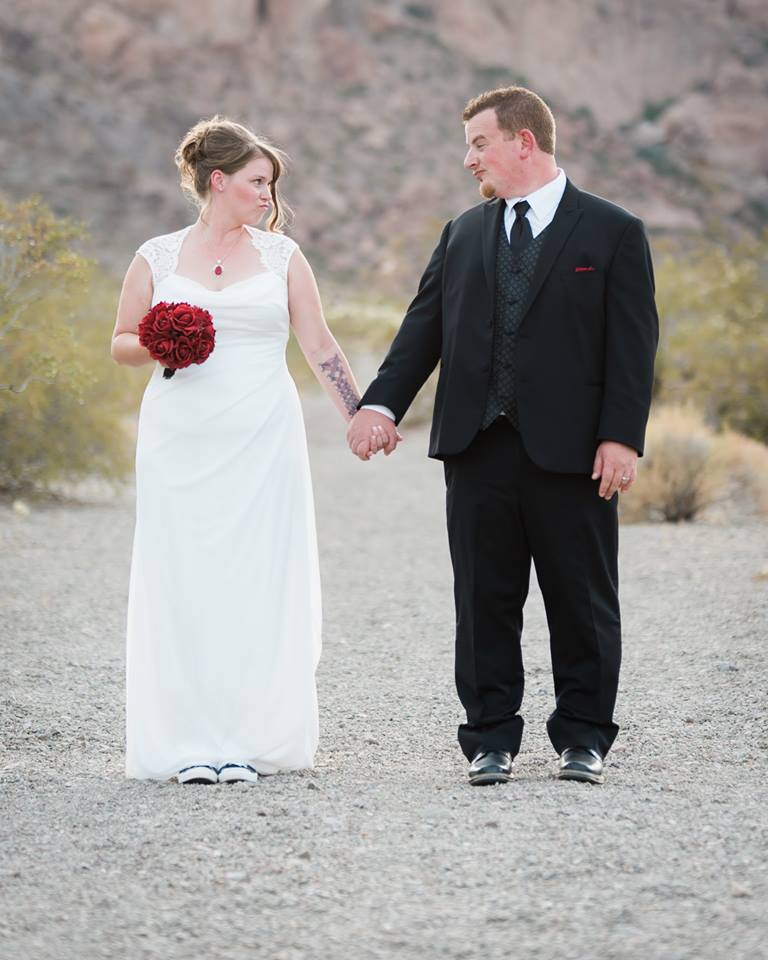 How long have you been together as a couple? 20 months

How  and where did you first meet? We were both on Match.com. We both owned Jeeps of the same kind and I (Nicole) reached out to talk to him (Phil) as I had to know more (like what he looked like, as he didn’t have a picture). We met in person 3 days later, and then not even 3 days later we became exclusive.

How did you propose? (how and when did you decide to get married?) We were on a family vacation (Phil, his daughter, Nicole, and her son). We stopped in Michigan for a break and to take a walk. I (Nicole) walked out onto a rock and was looking out at the water. Next thing I knew Phil was behind me, and told me to close my eyes. He got on one knee (on a rock, about 10 feet from shore – hence him telling everyone he proposed in the middle of the ocean)  and then told me to open my eyes. I did and he proposed. I said YES! 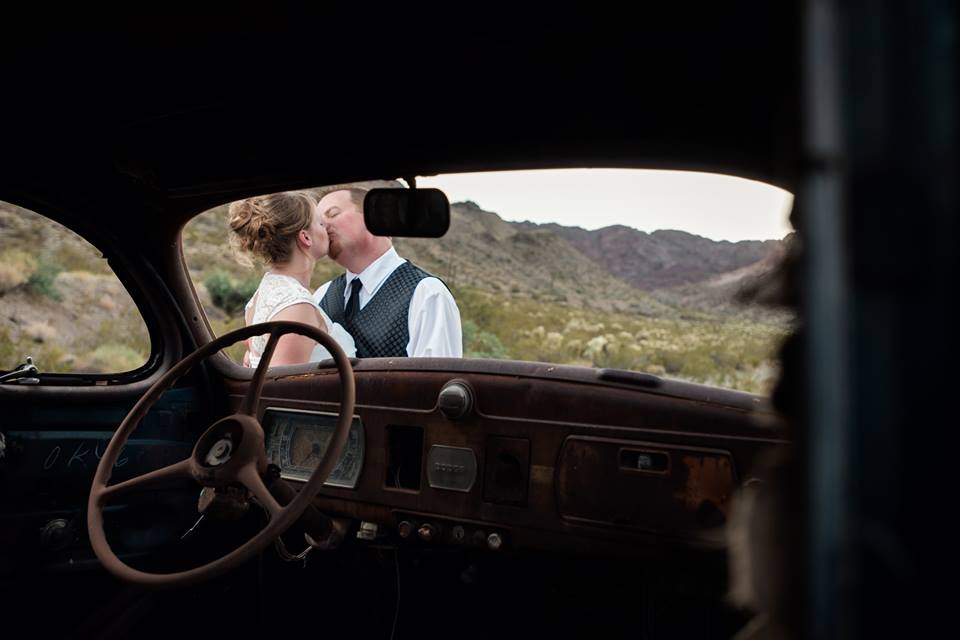 How did you find Luv Bug Weddings? Online (on Yelp I believe) by searching for wedding ministers/companies in Vegas.

What made you decide to choose Luv Bug? Luv Bug had great reviews , was fast to respond, was very polite and helpful, and didn’t have any hidden costs. 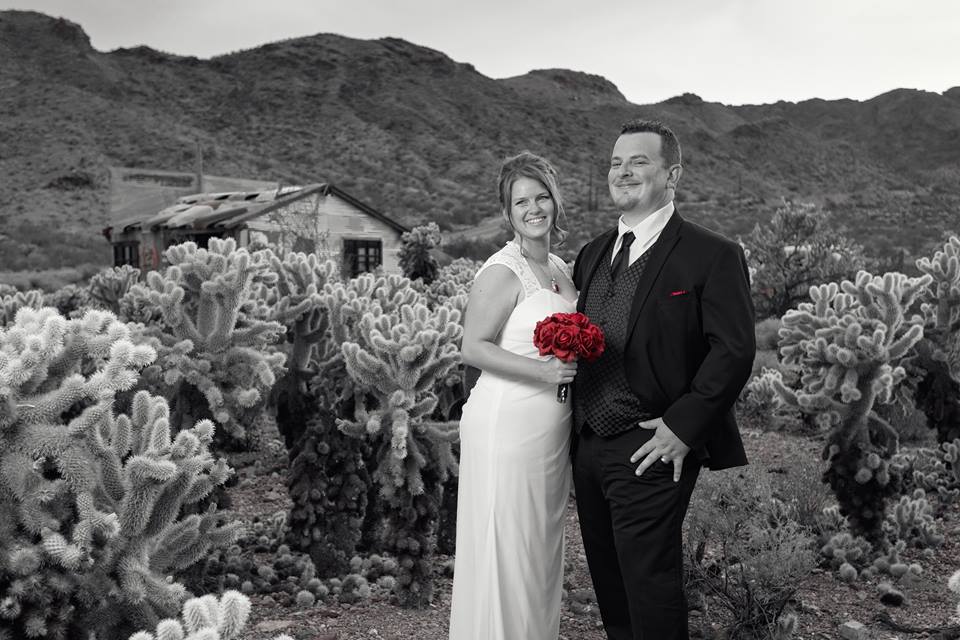 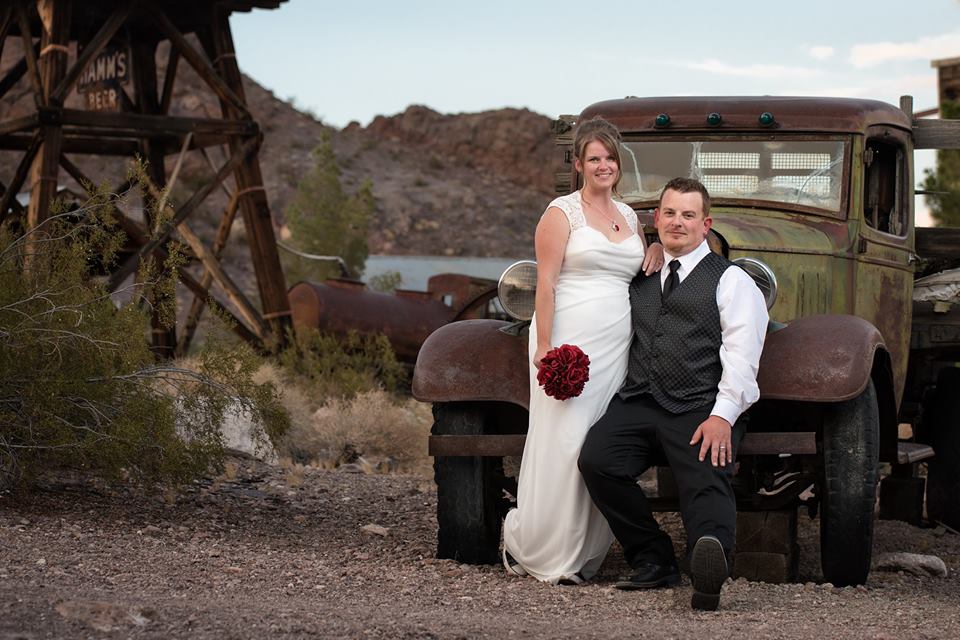 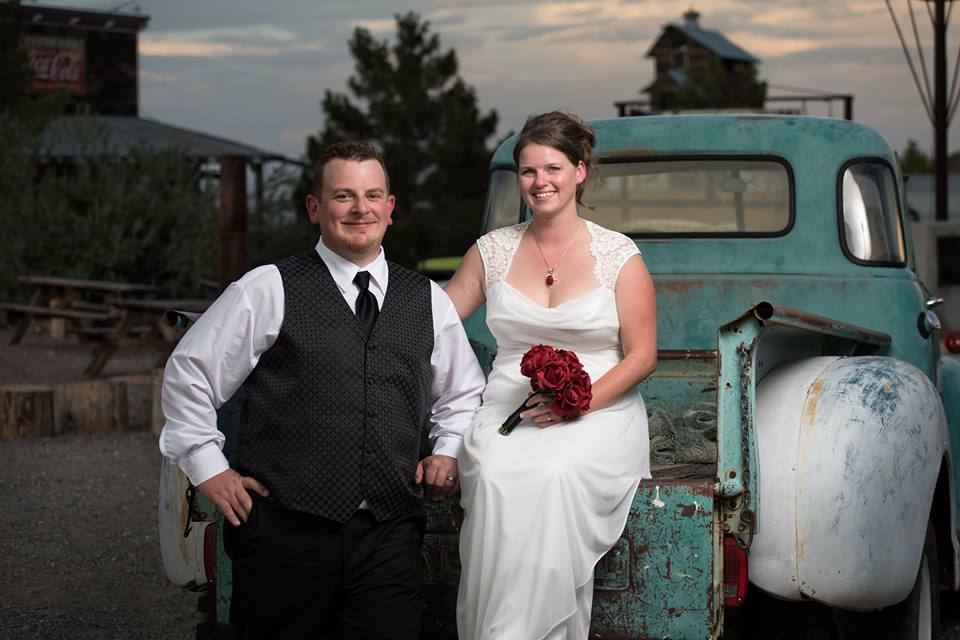 What do you think is the best part about Las Vegas? That you don’t have to get married in a chapel and there are plenty of things to do.

What was your favorite memory from your wedding day? Seeing my husband get emotional and not having one thing go wrong. 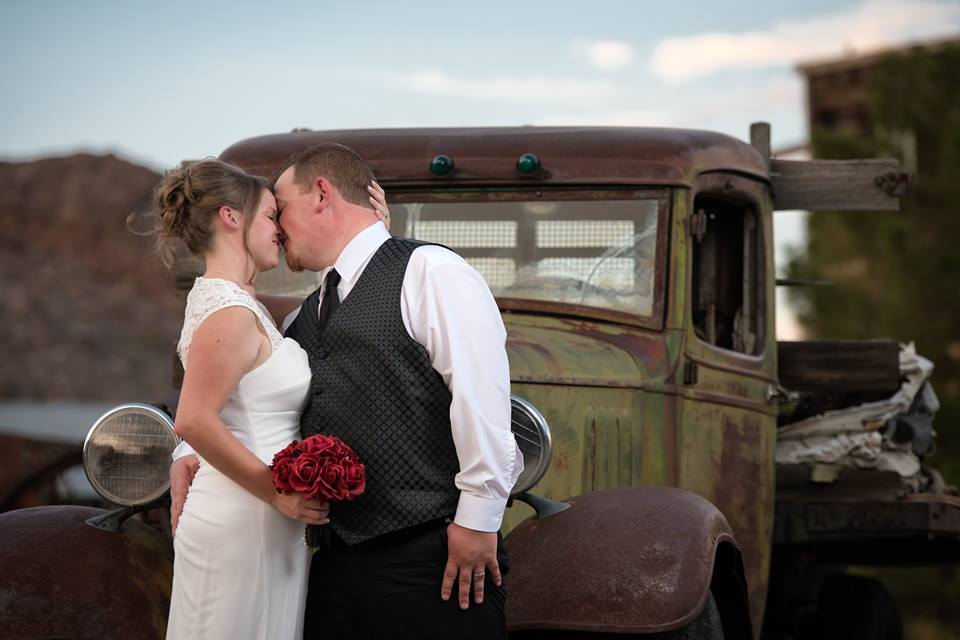 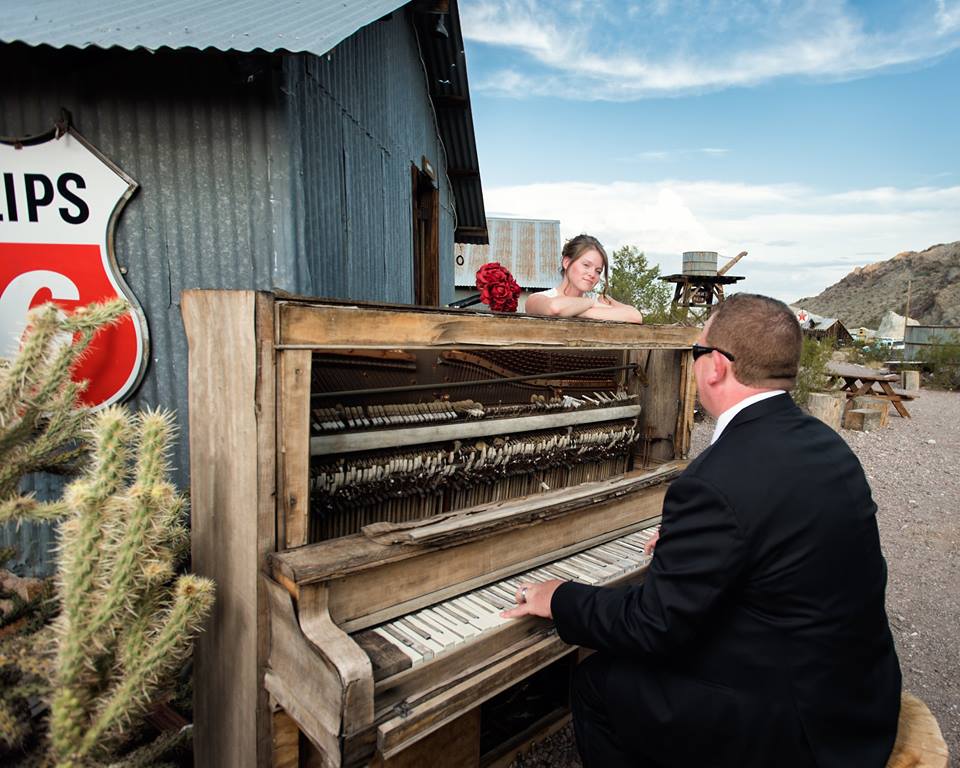 What is your best advice for keeping the Luv on in you relationship? Communication, honesty, and lots of alone time doing things you both enjoy.